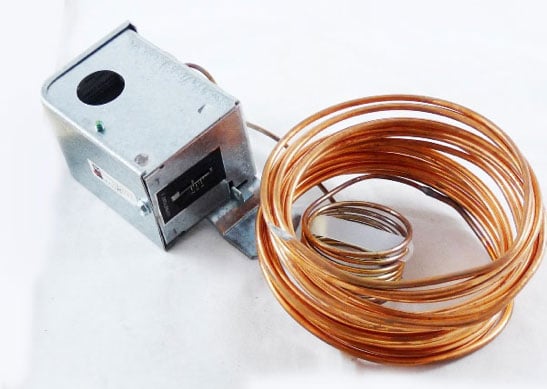 Have you had your freeze stats checked?

Have you had your freeze stats checked?

In cold weather, air-handler water coils that have outside air make up must be protected from freezing. On the water side, this can be accomplished by several different options, some examples are; adding glycol to the system loop, adding circulatory pumps, preheating the air before it gets to the coils, and closing outside air dampers. One specific measure to ensure that your water coil does not freeze and bust would be a freeze stat which is a low-ambient-temperature-limit control device. If air temperature at a coil drops to just above freezing, a freeze stat changes over its contacts and initiates protective action. It also can be used to open a hot-water control valve to allow full hot-water flow through a coil.

Freeze stats have a 10- to 20-ft-long capillary tube that is placed across the face of the coil. The control responds to the lowest 8-in. to 12-in. length of the capillary tube. If any portion sees temperatures dropping to a level at which the coil could be in danger of freezing, its contacts change over.

It is best to check your freeze stats before the fall and winter seasons to ensure proper operation. This would be making sure that all electrical components of the freeze stat operate properly. Checking the freeze stat would also mean cleaning and wiping down anything that would be on the freeze stat itself along with the capillary tubing. An example would be dust build-up that may act as an insulator to the freeze stat not allowing it to operate correctly.